Contrary to the implications of the statement in a 1938 ad for Betty Hartford dresses that said, “A new group of dresses by that clever young designer, Betty Hartford,” Betty Hartford was a fictional character. The surname was allegedly derived from the Hartford, CT town in which the company was headquartered. That company was owned by Ralph Kolodney who was born in Russia in 1888. By 1917 his occupation was reported to be “Shirt Waist Manufacturer.”

Trademark filing information for Betty Hartford clothing notes the first use of that name was in 1937, although it may have been used before that official date. Ads for Betty Hartford dresses in newspaper databases beginning around 1938 advertised their rayon, cotton, and silk dresses.

A 1941 article noted Kolodney & Myers, Inc. was a manufacturing division of R. Kolodney & Co., Inc., makers of Betty Hartford dresses and by 1955 Sanford Dress Co. was manufacturing the dresses.

A significant, late-1950s disagreement with the IRS disrupted the lives of Ralph Kolodney (president of the company) and his son Robert (executive VP), but they were eventually able to recover and the company apparently thrived until 1973, at which time a Going Out of Business ad appeared in the newspaper and in 1979 Ralph Kolodney died at the age of 91. 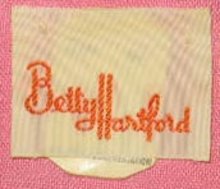