That is the official definition of Harris Tweed as set by British law in 1993. Over the years this definition has changed, as production methods have changed.

The Outer Hebrides has a long history of weaving cloth. Before the turn of the 20th century, this cloth was made almost entirely by hand, using the wool from sheep grown on the islands. Production was quite small, but in the early days of the new century the Industrial Revolution reached the islands and new weaving, spinning, and carding machines were introduced. Output of Hebrides Island tweeds was greatly increased.

By the 1930s the output of tweed required a greater source of wool, so the original definition was expanded in 1934 to include wool that was produced in Scotland. This, however, led to some mainland companies labeling their product as Harris Tweed. The matter was ended in 1964 when the courts declared that the manufacturing process must be done completely within the Outer Hebrides in order for it to be called “Harris Tweed.”

Written by fuzzylizzie with special thanks to Ken at Aero for additional label information. 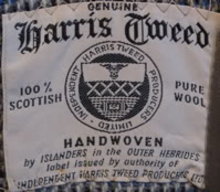 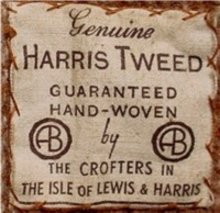 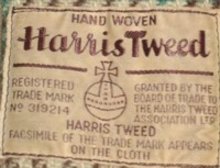 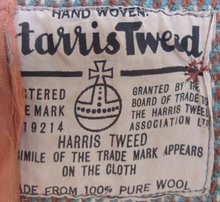 from a 1940s CC41 women's coat. Font color changed to black to show respect for the many Islanders who lost their lives in WW2 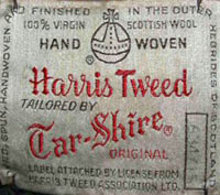 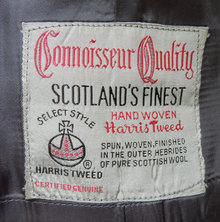 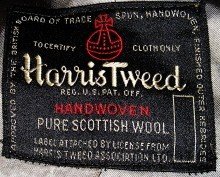 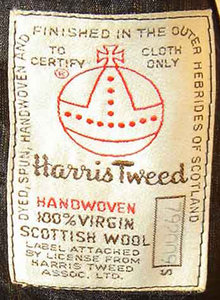 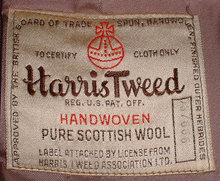 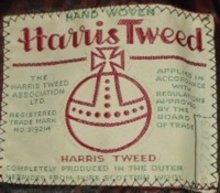 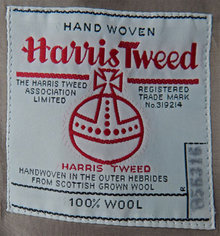 Courtesy of EndlessAlley
← previous next →