Lulu Guinness began making handbags in 1988, as a result of her not being able to find a bag that met her own needs. At first the business was based in her home, but the popularity of her novel designs led to rapid growth. By 1996 she had opened her first retail shop and was producing collectible bags.

Today there are Lulu Guinness stores around the world and she produces not only handbags, but other accessories and home furnishings. 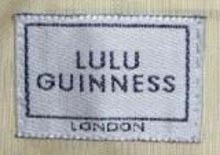 Courtesy of atticville.com
← previous next →