Guccio Gucci (1881-1953) founded his leather works in 1921 in Florence, Italy. As a young man, Gucci left his native Tuscany to work in London and across Europe in the tourist industry. He was a sharp observer and noticed the luxurious leather luggage used by wealthy tourists.

When he returned to Florence, he worked in one of the city’s many leather goods workshops, learning the craft. In 1921 he opened his own shop, in which he sold high quality leather goods made by others. Soon he opened a workshop at his store to repair leather goods and to produce his own leather goods.

Most biographies of Gucci and histories of the company state that in the early years, Gucci also made saddles, which is used to explain why there are so many equestrian influences in Gucci products. But according to the family sources cited by Sara Gay Forden in her book House of Gucci, this is not true.

All through the 1920s Gucci made luggage and the various leather containers that well-to-do travelers required. By the 1930s he had expanded to shoes and handbags. During the war years when leather was scarce, Gucci turned to canvas, developing a signature printed canvas that led to the famous double-G logo that came out some years later.

In the 1950s the company was inherited by Guccio’s sons and the company opened a store in the United States. The company began its use of the trademark green and red striped webbing. By the 1960s Gucci was a well-known luxury brand and it was a favorite of many members of the “jet set”.

In the mid-1960s the Gucci company developed some of the products that are most closely associated with the name. The brightly-colored floral scarves were first made in 1966, after Princess Grace visited the Milan store. The first scarf was presented to her as a gift. At that time Gucci had just begun making leather clothing and now they branched off into silk dresses, made from printed silk in designs similar to the scarves.

1968 brought about the introduction of the ultimate Gucci status symbol, the shoe decorated with the snaffle bit. The double-G monogrammed fabric was brought out in 1969.

Gucci prospered through the logo craze of the late 1970s and into the 1980s, but by the late 1980s Gucci was no longer considered to be fashion forward. It was Tom Ford in the 1990s that made Gucci a leading fashion house. Ford joined Gucci’s ready-to-wear division in 1990 and by 1994 he was creative director for the house. His work there has changed the image of Gucci from a solid, but slightly boring, luxury leather maker, to that of fashion leader. Tom Ford’s last collection at Gucci was for Fall, 2004. The next two collections were designed by Alessandra Facchinetti,followed by Frida Giannini. In 2015 Giannini left and Alessandro Michele was named creative director. 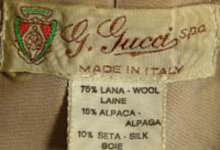 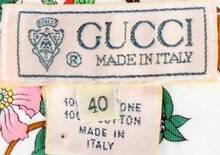