At the end of 1965, the previous owners of a little vintage clothing stall opened a shop called Granny Takes A Trip in King’s Road, London. It was run by Victorian clothing collector Sheila Cohen, her boyfriend, the painter Nigel Waymouth and his friend, the mod tailor John Pearse. The trio originally started “simply because we think young people have got the money to spend but they want to see more style. So many boutiques are beginning to sell the same things. We can offer an exclusive thing to everyone, because we rarely find two dresses which are identical. Probably the next biggest reason was that we all wanted to work for ourselves.”

The shop began as a place for hippies to get antique clothing, but evolved into creating its own unique designs and styles influenced by fashion of the past. They mended and cleaned all of their vintage fashions, using “a theatrical costume cleaner who cleans the things beautifully”, and then adapted other items which were handcut and beautifully made into brand new styles. “We buy our stuff from markets, private collections, junk shops – anywhere else we see it. We even have someone who sells stuff to us from Scandinavia.” The prices of the clothes they sold varied as much as the styles, selling their own velvet coats and pony-skin shirts cheaply at the beginning, but charging about 15 guineas for an old French Pacquin model from the early 1900s.

When the unique new designs became a major element of Pink Floyd’s shows (Pink Floyd founder Syd Barrett notoriously carried his dirty clothes into the London boutique because he thought it was a dry-cleaners) at the UFO club their clientele soon expanded to include The Small Faces, The Byrds, Jimi Hendrix, The Who, The Rolling Stones and of course The Beatles. Nigel Waymouth remembered “One morning we were sitting around cross-legged on the floor, passing a joint around, and these two blokes came in. They looked around and said, ‘This is a nice place isn’t it?’ We looked up, and of course it was John and Paul.”

As the business expanded, additional involvement was needed and two Americans were brought in to co-run the place – Marty from Brooklyn and US-born Gene Krell. When a decision was made to open a boutique in LA, Marty went back to the US to scout out new locations and ended up bringing home not only information on a suitable venue on Sunset Strip, but also super-groupie Miss Pamela who famously bumped into Mick Jagger in the shop one day and began an affair with him.

Originally decked out as a psychedelic New Orleans bordello complete with an old horn gramophone, the facade of the shop became just as famous as the clothes; beginning with giant and fierce blow-ups of Native American Indian chiefs Low Dog and Kicking Bear designed by Nigel Waymouth and Michael English, quickly followed by the famous pop art portrait of Jean Harlow, and finally the front end of a 1947 Dodge was painted yellow and bolted onto the front window. The flat above the shop was occupied by a student who later gained fame as the notorious writer – Salman Rushdie. He remembered the place as “pitch dark. The air was heavy with incense and patchouli oil and also the aromas of what the police called Certain Substances… it was a scary place.” He quickly got over his fears when John and Yoko arrived outside the shop in their Rolls Royce one evening and ventured downstairs to introduce himself. When Sheila Cohen answered the door to him she drawled “Don’t you know the art of conversation’s dead man?” and slammed the door in his face.

A music group called The Purple Gang released a single called Granny Takes A Trip and the shop owners were so delighted with it that they ended up with Nigel Waymouth designing their poster – an old lady on the back of a Harley Davidson. When the group arrived at the boutique to have the publicity shots taken for their album they were shocked to have Paul McCartney turn up in the middle of the shoot to buy a dress for his girlfriend Jane Asher. He stayed around to watch the photo shoot along with Pattie Boyd who was waiting outside.

Nowadays the fashions of Granny Takes A Trip decoratively adorn walls at venues of the Hard Rock Cafe chain. In St Louis there is a blue velvet double-breasted jacket worn by Eric Clapton while performing with Blind Faith in 1969. At their Boston cafe, there is a green velvet jacket with birds embroidered on the front that was made for Keith Richards of the Rolling Stones and worn on stage by him in the early 1970s.

NOTE – The vintage fashion store in Hermosa Beach is not connected with the original Granny Takes A Trip as it has existed only over the past couple of decades. 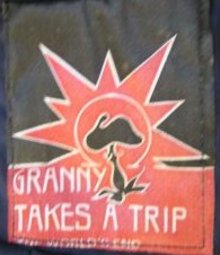 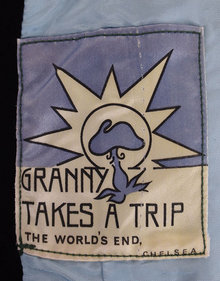 from an early 1970s velvet coat