The H.W. Gossard Company was founded in Chicago in 1901 by Henry Williamson Gossard. The product was corsets. In 1922, H.W. Gossard opened offices in London and built a factory there in 1926. There they developed the first front-lacing corsets.

In the 1930s the company headquarters was moved to Britain. They continued to make corsets and they also produced bras. During WWII, Gossard switched from corsets to parachutes, but after the war continued in the production of “foundation garments.” They developed lightweight girdles and bras using a relatively new fiber, nylon.

Following the tide of fashion, the late 1960s brought a more natural look to Gossard. They developed the Wonder Bra and, in the 1980s, the Ultra Bra. Gossard is still in business, their latest innovation being their Superboost Secret line. 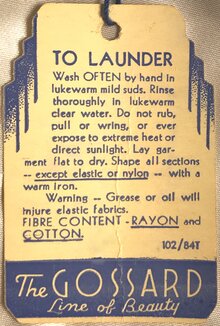 Courtesy of pinupdresses
← previous next →