Tom Ford (b.1962) is an American fashion designer. He is well known for his legendary work with Gucci. After graduating from the Parsons School of Design in 1986, he took fashion design jobs with Cathy Hardwick and Perry Ellis.

In 1990, Gucci’s creative director recruited him to design women’s ready-to-wear. Ford accepted and was quickly promoted to chief director for Gucci. By 1999, Ford had helped propel Gucci into a fashion power worth over $4 billion. Gucci acquired the house of Yves Saint-Laurent and named Ford the creative director of that label as well.

In 2004, Ford stepped down or was asked to step down from both of his positions, making 2004 his last collection with Gucci. In May 2005, Ford was awarded the André Leon Talley Lifetime Achievement Award from the Savannah College of Art and Design. In 2007 his first B&M ‘Tom Ford’ store opened in New York City with plans on opening more world wide. 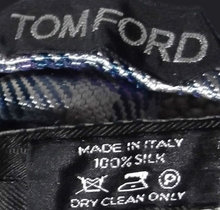