William Filene owned several small mercantile stores in Lynn and Salem, MA as well as Bath, ME before consolidating his businesses into one five story building on Washington Street in Boston in 1890. The store, called William Filene & Sons, was believed to be the largest in Boston devoted to women’s ready-to-wear clothing and accessories, relatively new additions to a market dominated by custom made clothing at the time.

This business model proved so successful that Filene’s expanded the original store four times over the years. Opening day of the expanded Filene’s store on September 3, 1912 drew 235,000 people, a number equal to a third of the entire population of the city of Boston. During the early years, the store was divided into many glass fronted “storefronts” that housed separate departments, such as “Women’s Motor Apparel Store” and “Lingerie Corset Store”. Girl’s clothing was added in 1904, and men’s and boy’s wear were added to the new store opening in 1912.

In 1922, Filene’s opened its first branch store in Providence, RI, and in 1929, Filene’s joined with Lazarus’s of OH, Shillilto’s of OH, and Abraham & Straus of NY to form Federated Department Stores. Bloomingdale’s joined the Federated Stores in 1930.

In 1928, Filene’s was the first American store to have a rush shipment of the newest fashions sent from Paris on the Graf Zeppelin. In 1951, Filene’s was again first to install automatic elevators.

from an edwardian shirt 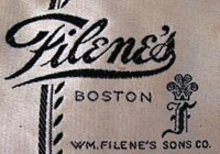 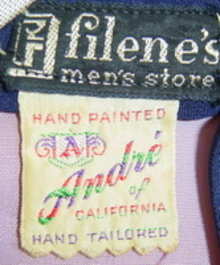 Courtesy of glad rags and curios
← previous next →