*Feller’s* (“The Store Dependable”) was originally a womens’ dress shop and was opened by a Romanian immigrant, Charles Nachlath Feller, in 1922 on Market Street in Harrisburg, Pennsylvania. He later moved to a larger location. and added a men’s department, but was most widely known for furs. Feller’s closed in 1977. 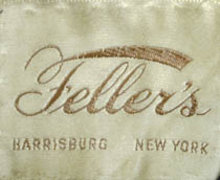 Courtesy of doubleseahorse
← previous next →