Leslie Fay was the clothing business founded by Fred Pomerantz. In 1942, Fred Pomerantz began making uniforms for the women in the US armed services. The government had done a study of statistics concerning the measurements of the typical female figure, and this information was provided to Pomerantz in order to help him make uniforms that properly fit.

After the war ended, Pomerantz decided to produce a line of women’s clothing using the same sizing as he had used during the war. In 1947 he founded Leslie Fay, which he named after his daughter. Leslie Fay became a major maker of affordable and attractive dresses and sportswear marketed toward the middle aged. In 1956 the Leslie Pomer label was registered, aimed at a somewhat more youthful market.

In 1965, Herbert Kasper joined the firm, designing under the Joan Leslie label, a slightly higher-priced line. The Andrea Gayle label – named after Pomerantz’s granddaughter – was added that same year.

Through the 1980s, the company continued to prosper, but in 1993, Leslie Fay was bankrupt, having suffered a scandal involving fraud. Compounding their problems was a strike at their manufacturing plant, which resulted in the firing of all workers, and the ultimate closure of the factory, one of the last large unionized clothing manufacturing factories in the USA.

The company was able to reorganize and remain open. They are not known for a fashion forward look. Their lines include Joan Leslie, David Warren and Outlander, which are marketed mainly through department stores.

From a late-1950s cocktail dress 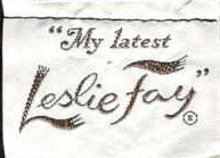 from a 1970s jersey evening gown 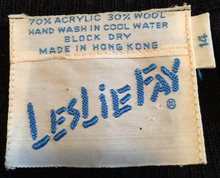