Esprit is the name of the youth-oriented sportswear company renowned for fostering a sense of social responsibility among its employees and customers. Esprit built its image as a leader in “green marketing” and social awareness campaigns, using its platform to address important issues such as the AIDS epidemic, racism, and environmental conservation. It was also the first company to produce catalogs on recycled paper using soy-based inks.

Originally founded in the mid-1960s by Susie Tompkins and Jane Tise as the Plain Jane Dress Company, it soon included partners Alan Schwartz and Doug Tompkins, Susie’s husband. In 1976, not long after a suspicious fire engulfed the company’s San Francisco headquarters, Doug forced a coup that side-lined Tise and Schwartz, changing the name to Esprit de Corps to reflect the company’s change in direction. The Tompkins’ bought out their partners, with Tise inexplicably staying on as chief fashion designer until 1979, when she left the company for good. In 1979, the iconic Esprit logo was developed by graphic artist John Casado.

Doug and Susie pioneered an employee-friendly environment that was ahead of its time, with perks that included an employee cafe, generous employee discounts, subsidized cultural events, and vacations with environmental themes. Esprit was also high-minded when it came to its design choices, hiring architect, industrial designer and founder of the experimental, post-modern Memphis Group, Ettore Sottsass, to design Esprit stores and showrooms. Its “Real People” campaign, artfully shot by photographer Oliviero Toscani, featured employees and other non-models, showcasing a progressive, casual, yet high-style sensibility. Esprit was the first brand to require their retailers to dedicate space in their sportswear departments to serve as Esprit showcases, thus creating a “shop within a shop”.

Between 1984 and 1986, the company continued to expand, and by 1986 Esprit was generating $800 million in yearly sales. By 1987 the company had 14 retail stores globally, but saw sales slippage for the first time in its history. The cause of this downturn was assumed to be due to over-zealous expansion, but there was also intense internal conflict between the partners over Esprit’s direction. The Tompkins divorced in 1989, and in 1990, Susie Tompkins led a leveraged buyout and gained control of the company. Appointing herself creative director, she brought back her old design team and launched new, socially relevant ad campaigns. Despite these good intentions, Esprit never recovered from the buyout and went into technical default on its outstanding loans within less than two years. Susie Tompkins was forced to give up her corporate title, but stayed on as a consultant.

Forced to restructure its loans in 1992, Esprit experienced a succession of CEOs and marketplace flops. Esprit’s long decline continued until 2011, when it closed all North American stores. While Esprit as a brand still exists, it does so in name only, with stores in small European towns and Chinese shopping malls offering products that have little relationship to its former identity as an iconic lifestyle brand. In March of 2020, claiming hardship caused by the COVID-19 pandemic, Esprit filed for Protective Shield Proceedings to protect it from creditors. This began a major restructuring of the company. All 56 of its stores in Asia outside of mainland China were closed, with 50 stores in Germany slated for closure by November, eliminating jobs of more than 1200 employees. 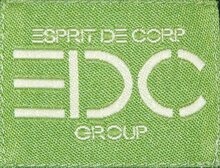