Marion Donaldson has been credited with bringing the clothes of Swinging London to Glasgow, Scotland in the mid-1960s.

“The Marion Donaldson label was created in Glasgow in 1966 by newly-married David & Marion Donaldson, (then aged 22) with a capital of £50. Within three years it had a turnover (at today’s values) of £1,000,000. All the design and the manufacturing was done in Glasgow, but our market was always widely based throughout the UK. One of our earliest major customers was Fenwick’s of New Bond Street, London. Right from the start we used a lot of Liberty’s fabrics and this grew into a close working relationship between ourselves and Liberty of London. We were Liberty’s biggest UK customer. Marion Donaldson Ltd. traded from 1966 until 1999, manufacturing on average 1,000 garments a week.

The Art Nouveau sew-in label, inspired by an oval pewter mirror we bought for 35p at an auction, was originally printed purple on white in the sixties. We then changed it to printed dark brown on cream. Later, it became woven gold on a purple ground. The final version was the woven silver on black”. ~ David Donaldson 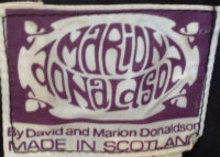 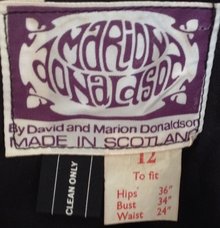 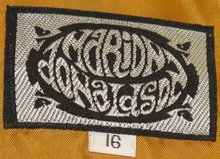 from a 1980s silk skirt-blouse set