Dollyrockers was one of the labels of the British Boutique Movement. The house designer for this label was Samuel Sherman, known as “Sambo”. Samuel Sherman teamed up with Dolcis Shoes so that they could coordinate that season’s ranges and carry out a joint publicity campaign headed by the Smith’s Crisps girl Pattie Boyd, who had conveniently just begun dating a Beatle when the campaign began, so she got a lot of extra attention for both labels.

In the 1960s they often did simple dresses, but they are probably more famous for their peasant dresses of the 1970s. They were active about 1963-1975.

Additional notes about the last label:

“Dolly Rockers, London” is a range that has been created by the cutting and resewing of vintage items. It’s a very popular range and they do some really quite groovy stuff if you can cope with the idea that they’ve hacked some fab vintage item to bits to create it. In fact it’s so popular that they’ve taken to sewing their label on the outside of the clothing now so that everyone knows you’re wearing a Dolly Rockers item. They were originally based at Camden Market, but now sell via concessions at London stores such as Top Shop & Selfridges. 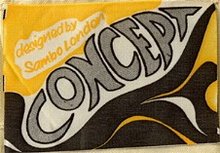 from a 2000s garment that was made from vintage