Founded in Montreal in 1920 by a Mr. Rosenfeld, Diamond Tea Gown Inc. had a great reputation for both quality and design. The company has changed hands twice over the years; in 1967 it was sold to Ernest Saykaly, owner of the family-run business French Maid Lingerie, and in 2001 to John Souaid who first joined the company as President in 1972.

In the early years they primarily made hostess gowns and bathrobes and later branched out to include a full range of lounge wear, robes and, most recently, casual wear.

Over the years their reputation for high standards in quality fabrics and design has been maintained. Their client list includes Saks Fifth Avenue, Neiman Marcus, Harrods, Bloomingdales and Nordstroms.

Our thanks to John Souaid, President of Diamond Tea Gown, for this information. 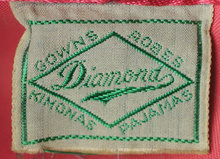