Debenham & Freebody, the traditional British department store, originated in a draper’s business founded in 1778 in London. In 1813 a partnership between William Debenham and Thomas Clark created the store known as ‘Clark and Debenham’. After Mr. Clark’s retirement, William was joined in the business by his son (also William) and William Junior’s brother-in-law, Clement Freebody; hence the 1851 ‘Debenham, Son and Freebody.’ Under the new generation of management, after William Sr.‘s retirement, the business became ‘Debenham and Freebody’ in 1863.

The original London draper’s shop, which was transformed into a fully-fledged department store in 1905, became the first of over 60 nationwide stores. In 1935 Debenham and Freebody advertised their fashionable model gowns under the tagline: ‘Distinction in Dress at Moderate Cost’

The original family associations dissipated after the listing of the company on the London Stock Exchange in 1928. In the 1970s, or early 1980s, ‘Freebody’ was dropped from the store’s title and the chain adopted the holding company name of ‘Debenhams Ltd.’ that had been in use since its expansion in the 1910s.

This development has given rise to some folklore about the store’s history. Recent newspaper stories allege that the business was founded by Freebody who, feeling the inadequacy of a single surname, added ‘Debenham’ after the Suffolk village (in some versions, his birthplace). The ironic punchline to this tale is that when the marketing men renamed the chain in the 20th century, they jettisoned ‘Freebody’ and kept the allegedly meaningless ‘Debenham’. The original source of these stories is unclear.

Debenham’s was acquired by the Burton Group of clothing stores in 1985, a development that substantially affected the store’s garment lines and marketing. In 1998 Debenham’s became an independent company again, with 106 stores across the UK stocking mid-range, own-label products alongside brand-name concession spots.

from a late 1950s smoking jacket 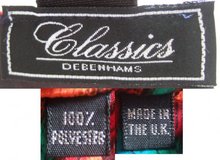