Chessa Davis was born in Albuquerque, New Mexico into an old Spanish land-grant family. Her first career was as an actress, having been discovered at age 12 by Charles Laughton. She appeared in many films & hundreds of TV shows. She first got into fashion by giving her husband, Ellis Kadison, some wardrobe advice on a film he was making.

But what really got her design career into high gear was a peasant skirt she made for herself to wear to a party. A Beverly Hills shop owner ordered 6 on the spot & they sold out immediately. She made her garage into a workshop & hired seamstresses to make the unique skirts, which were based on old peddler skirts. Historically, they were stitched together out of odds & ends of fabrics & embellishments were added. These skirts then became popular among the rich, who tried to outdo each other by adding more & more ornaments, including intricate needlework patches, wedding rings, baby spoons, thimbles, rings & coins.

In the early 1970s these Peddler’s Cloak skirts, being manufactured in California by WW Duke, became wildly popular among the bohemians & artists. Thousands of them sold around the world, making Chessa famous for this rich peasant style. Some of the names of the skirts were Tinker Frau, Aunt Goldie, Captain’s Daughter & Georgetown. They were made in panels & included patchworks in cotton, gauze, lace & velvet. Many of the skirts came with blouses & sashes. Quoting Chessa: “they are romantic, feminine, comfortable, yet not a costume. And they make a woman look & feel young”. Some of her customers were Princess Grace, Dinah Shore, Mary Tyler Moore & Betty Ford. 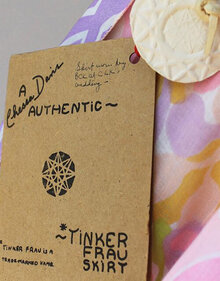