The William H. Davidow and Sons company, manufacturers of coats and suits, was founded in the late 19th century. Eventually the business became Davidow, known for their tailored suits. Davidow suits were always wonderfully cut and made, using integral features of the fabric rather than applied detail. By the 1960s they were producing copies of Chanel-designed suits — a classic box jacket suit with straight skirts that could be found in better department stores across the USA. 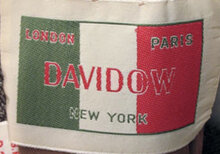 Courtesy of Past Perfect Vintage