Comme des Garcons is the company founded by Rei Kawakubo. Kawakubo was born in Toyko, Japan in 1942. She studied art, then worked in advertising. In 1969 she began working as a stylist, and formed Comme des Garcons.

She began designing in 1973, and her first show was in Tokyo in 1975. The next year she opened her first shop. She became internationally prominent in 1981, after a startling show in Paris in which she featured garments that were randomly wrinkled, hemmed, seamed and ruched.

Comme des Garcons established a reputation for the avant garde, often using unusual and complex cutting. She has not been afraid to think of reshaping the human form, often adding padding to form humps and mounds. Rei Kawakubo’s work is often compared to the other Japanese designers of the late 20th Century – Yamamoto and Miyake.

“My shops are conceived of for people who get energy from wearing these clothes, who like taking risks.” – Rei Kawakubo 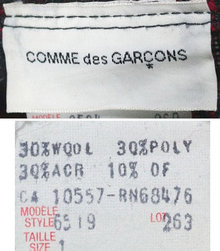