Ossie Clark (1934-1996) went to work at Alice Pollock’s Quorum boutique in 1965, along with textile designer Celia Birtwell, whom he later married. Together, they created clothing that was one of the defining looks of the late 1960s and early 1970s.

Birtwell’s fabrics were romantic and printed on a variety of textiles, including chiffon, velvet, and rayon crepe. Clark took the textiles, often combining several in a single garment, and created beautiful dresses. They often had a scooped or deeply V-ed neckline, long flowing sleeves and ingeniously cut panels that gave the appearance of layering. He also did a line of snakeskin clothing that was wildly popular.

In 1969, Alfred Radley became a partner in Quorum, and Clark started designing not only for Quorum, but also for Radley. These Radley garments were not always designed entirely by Clark, as designers at Radley took his sketches and patterns and then designed other dresses using the design concepts. These clothes were much more affordable than Quorum designs, and so Clark’s influence continued to grow.

By the end of the 1970s, Ossie Clark’s career was pretty much over except for the occasional dress for a private client. He died in 1996.

The label was briefly revived in 2008 by Marc Worth and designer Avsh Alom Gur, but it closed after the fall 2009 collection was shown. 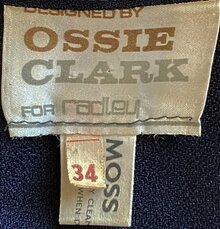 Courtesy of palette london
← previous next →