Roberto Cavalli (b. 1940) is firstly a textile artist who uses his fabrics as canvasses for his fashions. Roberto Cavalli was born in Florence, Italy into a family with strong artistic traditions. His mother was a tailor and his grandfather a Florentine impressionist painter, whose works reside in the Uffizi Museum.

Roberto began his career inventing a process for printing leather. He also became known for his leather and fabric patchwork clothes that created a scandal in his first collection, presented in 1972 at the Palazzo Pitti in Florence. His patchwork on denim fashions were snubbed by straight-laced Florentines but loved by the young hip crowd, including the influential Brigitte Bardot. Success came slowly over the years to Roberto Cavalli but in the 1990s he enjoyed a period of great success with his innovatively printed clothing.

from a 1973 denim patchwork dress 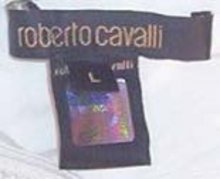