Oleg Cassini (1913-2006) first started designing in 1936, working for various stores in New York City. In 1940 he went to Hollywood where he designed costumes for 20th Century Fox. There, he met and married actress Gene Tierney in 1941. By the early 1950s he was back in New York, where he was designing under his own name. His look was very sexy and, at times, flamboyant.

But he was best known as the “Couturier to Camelot,” and his fashion collaboration with First Lady Jackie Kennedy. That collaboration had a profound impact on the way American women dressed, with the “Jackie O” look coming to mean simple designs with easy fit, straight lines, boxy jackets, and very restrained use of trims or ornamentation. Since the mid 1960s, he did little top line ready-to-wear and licensed his name extensively in swimwear, hosiery, foundations, sportswear, fur, and costume jewelry, to name but a few lines of products.

One of Oleg Cassini’s last lines was the Platinum Collection, made to order evening and bridal gowns based on his 1960s designs for Mrs. Kennedy. He died in March, 2006. 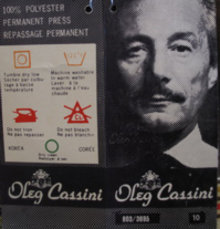 from a 1980s evening jacket 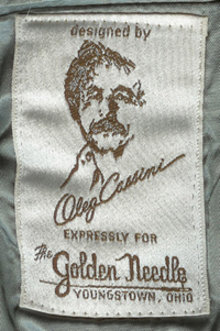 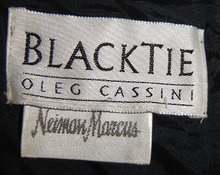