Pierre Cardin, (July 2, 1922 – December 29, 2020) born in Italy and a naturalized Frenchman, studied architecture but worked as a cutter for a tailor. In 1939 he became an apprentice to a tailor in Vichy. After WWII he worked as an assistant; first at Paquin, and then at Schiaparelli, before becoming the head of the workrooms at Christian Dior in 1946. He was at Dior in 1947 and helped develop the “New Look” which made Dior’s fame.

Cardin went out on his own in 1950, starting his own couture house. In 1959 he started a ready-to-wear line; a bold move for a French couturier at the time. Probably the look most associated with Cardin was the “Space Age” collections of the mid 1960s. Starting in 1964, Cardin made some of the most futuristic clothing of the era, with severe A-line mini dresses that featured cut-outs and molded forms, space helmet hats and solid color catsuits. He also designed men’s suits in a style that became associated with the Beatles.

Starting in the late 1960s, Cardin began licensing his name. At one time there were over 800 different licenses. Unfortunately this has worked to eclipse the innovative work he did in the 1960s. The vintage collector will likely find Cardin designs from the 1950s, 1960s, and very early 1970s to be most desirable, as these reflect Cardin’s work more closely than the later licensed products.

“The clothing I prefer are those I invent for a life that doesn’t yet exist – the world of tomorrow!” Pierre Cardin

from a 1958 silk bubble skirt dress 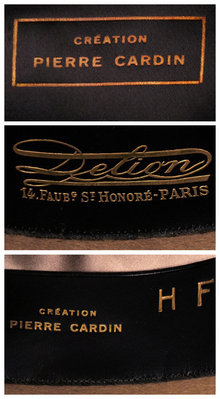 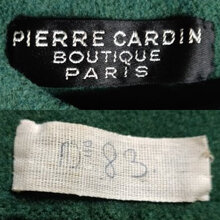 from a 1971 Space Age Cape-Dress. Bottom tag with numbers is from runway show. 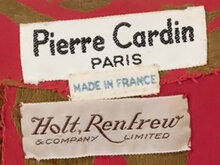 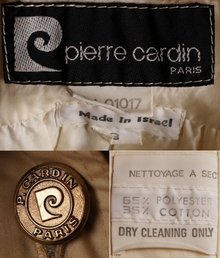 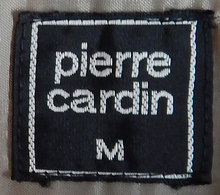 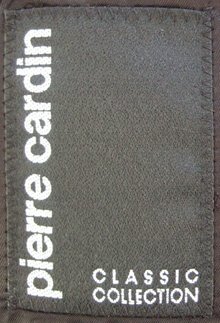 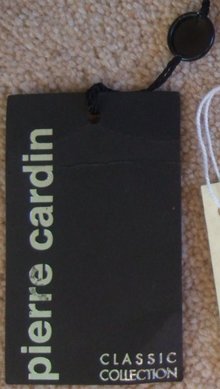