Lane Bryant (1879? -1951) was founded by a Lithuanian emigrant named Lena Himmelstein Bryant. When her husband unexpectedly died, Bryant went into business for herself in 1901, sewing bridal clothing in her apartment. Three years later, she was ready to expand into larger quarters. While applying for a loan, a bank officer misspelled her name as “Lane”, and she kept the name.

Lane Bryant was one of the first to mass-produce maternity wear. She had a hard time even getting newspapers to carry the ads for it, so she turned to catalogue sales. By the early 1920s, the Lane Bryant company was specializing in maternity and full figured clothing. By the 1950s, Lane Bryant was the sixth largest catalogue retailer in the US.

In 1915, the first branch store was opened in Chicago. The chain steadily grew until the late 1960s, when it passed the 100 store mark.

After Lane Bryant’s death, the business continued to thrive under the direction of her sons. Lane Bryant was acquired by The Limited in 1981, and today is still a leader in the plus-sized market. The business is now owned by Ascena Retail Group, Inc. 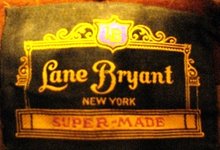 from a 1930s maternity corset 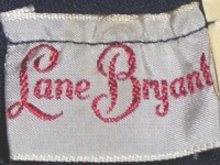