Body Map was the label created by David Holah and Stevie Stewart in 1982 which brought a fresh approach to fashion in early 1980s London. The two met at Middlesex Polytechnic (as was), started their own stall in Camden Market and both graduated with first class honours. They were heavily influenced by Japanese avant-garde and were fêted by ID magazine. Vogue were moved to say of them; ‘Young designers are re-drawing the hemline, any line, and not always with a ruler’.

They used graphic patterns by textile designer Hilde Smith on both stretch garments and more avant-garde sculptural pieces – the stretch clothes often had pieces of fabric in unexpected places, so that the emphasis was transferred from one place to another. Their 1984 show featured frizzy hair, bare breasts and skullcaps, prompting the influential Daily News Record to question whether it was ‘an outrageous pretension or merely a pretentious outrage’. They suffered from a lack of financial backing and, despite their critical achievements, folded in 1991. 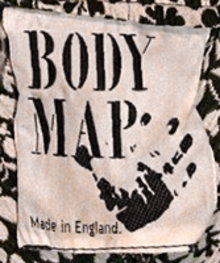