Biba started life in late 1963 as a mail order company advertising ready-to-sew garments designed by Barbara Hulanicki, although the enterprise did not have the name Biba at that point. The garments were advertised in British daily newspapers such as the Daily Mirror. Hulanicki’s big break came when Daily Mirror’s fashion editor Felicity Green asked Hulanicki to design a garment for a feature on young designers in May 1964. Not having a name for their new enterprise Hulanicki and her husband Stephen Fitz-Simon decided upon the name Biba, the shortened version of her sister’s name Biruta. Hulanicki designed a pink gingham dress and no less than 4,000 orders were received. Eventually 17,000 of the dresses were sold.

As the postal business grew they opened their first Biba boutique in September 1964 in Abingdon Road, London where they stayed until they moved to larger premises on Kensington Church Street in March 1966. They briefly opened a Biba boutique, the only one outside London, in Brighton in February 1966 and closed it by the end of the year.

In April 1968 the first of the Biba mail order catalogues was launched. There were six altogether, the last one published in the late summer of 1969. The famous Biba celtic label and ‘fat’ Biba lettering was designed by John McConnell in 1968. They introduced it into the clothes and it became the first Biba garment label. On September 15th 1969 Biba moved to much larger premises on Kensington High Street and widened their range of goods to include men’s clothes, a wider range of children’s clothes and household goods. They also brought out their first range of footwear at this time and were reportedly selling up to 75,000 pairs of the famous Biba skinny boots per month.

In April 1970 Biba launched a range of cosmetics and the ‘fat’ Biba lettering was slimmed down for printing on small items, though the celtic logo remained the same. This new look logo was then printed onto garment labels and the woven label and the ‘fat’ Biba lettering was gradually phased out. They also introduced different colour labels around this time, notably pale yellow and cream coloured labels into their lingerie and nightwear.

In February 1971 a Biba department opened in Bergdorf Goodman’s department store in New York. In September 1973 Biba made its final move into the ‘Derry & Thoms’ building on Kensington High Street where it remained until its closure in September 1975. In this store they introduced a different Biba logo for each department as well as retaining the original celtic logo. It is in this store Biba became the first ever lifestyle label producing own name brand food, leather goods and furniture amongst its vast range.

In July 1977 the rights to the Biba name were sold. The rights would be sold several times over the coming years. Since 1977 there have been a number of Biba shops and label relaunches, none of which have the involvement of Barbara Hulanicki and are therefore not considered to be true ‘Biba’ from a collector’s point of view.

Barbara Hulanicki designed under her own name from 1980 – 1987, when she moved to Miami Beach and began work as an interior designer.

Biba did not label their clothing until 1968. Until that time the clothing had only a tiny white size label with with the size printed in red.

The Biba font was designed by John McConnell in 1968. This label was used from 1968 around the launch of the first catalogue and it phased out in early 1971.

In 1970 the font was slimmed down, as when they first tried to reduce the logo for printing on the new cosmetics range the original font couldn’t be read, so it was slimmed down especially for printing and then used on garment labels and other products as well to keep the labeling uniform.

In 1971 all labels became printed (gold on black and later black on gold also like the third example).

Collectors need to be aware that there is a modern Biba label that looks very similar to the vintage ones. 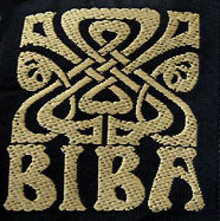 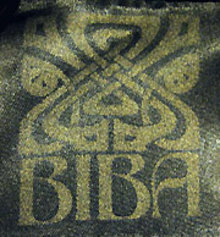 from an early 1970s jumpsuit 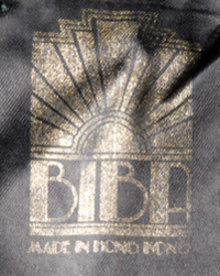 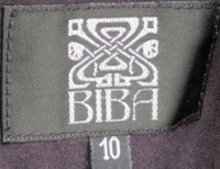 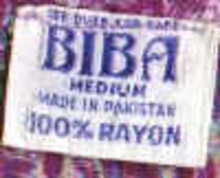 Fake label: not from the London boutique 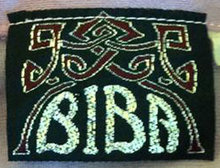 Courtesy of circavintage
← previous next →