Best & Company was founded by Albert Best in 1879. There was a main store in Manhattan and branches in cites throughout the east. Their children’s shop, the Lilliputian Bazaar, was the place to buy children’s clothes.

As early as the 1920s, Best & Co. was offering clothing that was designed with the needs of real women in mind. They took the clothing of a famous woman like Amelia Earhart and produced it for their customers. In 1938 they made a dress called the Nada Frock, but its designer, Claire McCardell called it the Monastic dress. It was her first huge success, and Best sold many of them.

Best & Co. is also known for giving both Vera Maxwell and Carolyn Schnurer their starts in the business. The company closed in 1971, but in 1997, the label was revived by Susan Hilfiger. There was a store in Greenwich, Connecticut, and a boutique with Bergdorf Goodman in New York, selling only children’s clothing. In June, 2009, the Best & Co. store closed as the company filed for Chapter 7 liquidation. 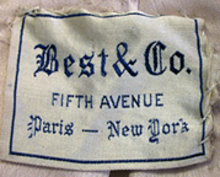 from a 1920s velvet and rabbit coat

from a 1960s dress ensemble

Courtesy of listitcafe
← previous next →