Bernhard Altmann first entered the textile trade in Vienna in 1915; in 1919 he founded his knitwear manufacturing business there. His company was very successful and it grew to employ 1000 people by 1938. But in that year the German Anschluss put his business under pressure, and he fled to London. His brother was taken prisoner by the Nazis and Altmann was forced to sign over the business in return for his release.

Altmann started a factory in Liverpool in 1938, which he had to abandon in 1939 as a result of the U.K. Enemy Alien Act of 1939 in which all nationals of enemy countries had to withdraw from coastline cities in three days after the declaration of war. They did not distinguish between Germans and displaced Austrian Jews, whose country had been absorbed into Germany.

After Liverpool, he immigrated to the United States, where he co-ventured a company in Fall River, R.I.. After two years he lost control of this last of his assets. In 1941 Altmann moved to New York, where he took a job at $50 a week. On March 3, 1943 he started a yarn trading company with a capital of $1250, which flourished.

The cashmere business started only in 1947, when he added the cashmere fiber line after a visit to Bermuda, where he learned that the delivery times of the Scottish manufacturers was over eighteen months, unheard of in the textile business. That business was built on a re-established Vienna factory, and another factory in Texas. By 1951 his U.S. company outsold all the Scottish manufacturers.

After Bernhard Altmann’s retirement in 1955, his successor first lost control of the Vienna business, and then sold off the U.S. operations to McGregor-Doniger in the 1970s. The trademark is still held by McGregor, which produces menswear under the Altmann label.

Bernhard Altmann was famous for his cashmere lines, but also produced clothes in Shetland wool and a lambswool/fur fibre blend called ‘Bernamere’. A 1960s advertising tagline for the company ran, ‘The Legend of a Great Knitter’.

Our thanks to Cecil Altmann for supplying information about his father’s business.

from a 1950s fur-collared cashmere sweater

from a 1950s cashmere cardigan with fur collar

from a 1950s fur-collared cashmere sweater 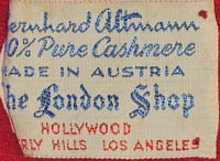 from a 1950s lambswool sweater 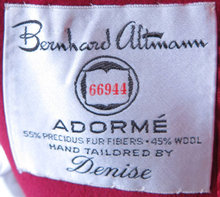