Berkertex of Bond Street, London, W1. was established in 1936 as a manufacturer of mid-priced clothing. The founder was Leslie Berker, and the company was to become one of the largest makers of clothing in the UK. In 1942, Norman Hartnell began designing ready-to-wear dresses for Berkertex, and continued until at least 1952, when Berkertex fashions held the largest fashion show in Wales, in Cardiff’s Sophia Gardens’ Pavillion, showing Hartnell’s designs, which was attended by some 20,000 women over two days. In 1944 a Hartnell design berkertex dress cost 60’ and 11 coupons (rationing was in force in Britain from 1939-52) by 1949 a similar dress cost between £6 6s to £6 12s. His name features on a special Berkertex label specifying Designed by Hartnell.
Berkertex was one of the first companies to move to Plymouth after WWII and were one of the biggest post war employers there. They had a plant in Honicknowle.
Berkertex was listed in a 1947 British Industries Fair Advert for Family Fashions as “Manufacturers of Distinguished Clothes for Women and Children including Dresses, Blouses, Suits, Coats, Sportswear for Women and the Junior Miss. Coats, Leginette Sets, Blazers, Buster Suits, Blouses for Children of all ages.” www.gracesguide.co.uk
Berkertex has been producing bridal wear since at least 1965 and continues today under the Berkertex Bride brand.
In 1990 Berkertex expanded into the casual wear market by opening the Genesis chain.
In 1992 Berkertex holdings went into recievership, but continued to trade after this date. 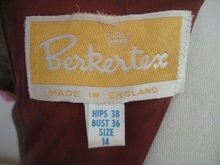 from a 1971 striped lurex maxi dress