Henri Bendel (1868-1936) started as a milliner. He opened his New York City hat shop in 1896. By the 1910s, he was producing high quality custom made clothing, and was also a major importer of French designs. He was one of the first Americans to buy at Chanel, and he imported and copied many of the French couturiers.

In 1931, the store opened a ready-to-wear (pret-a-porter) department, although they continued to be known for their top-of-the-line custom work. They continued to import French fashion through the Great Depression, but were forced to stop the practice with the outbreak of WWII. By this time, Henri Bendel had died, but his namesake store remained a major force in the New York fashion world. In 1946, the store was one of the first to view and buy from the new French collections.

Henri Bendel closed its custom workrooms in the 1950s. From 1960 through 1986, Geraldine Stutz was the president of Henri Bendel. Under her direction, the store became a major promoter of the youthful Mod look, and the subsequent young trends. They were also a pioneer in the boutique within a store concept.

In 1985 Henri Bendel was acquired by L Brands Inc., who in 2018, announced plans to close all 23 stores. In January 2019, its physical stores and website were closed, ending the brand’s fabled 123 year retail history. 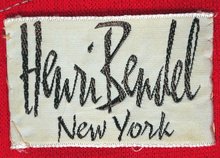