Bellciano was one of the lines of the Dave Bellsey Company, Inc. David Bellsey was born in Russia in 1891 and arrived in NY in 1892. A Manhattan based manufacturer of cloaks and suits, Dave Bellsey, Inc. was located at 512 7th Avenue. The company was active from at least 1936, with coat design patents registered as of 1945. By 1951, Dave’s son Robert Bellsey is noted as the maker of Bellciano coats and suits. Robert was President by 1954. The Bellseys also sold a petites line under the Bellciette label.
In the 1950s, several designers were credited, including Joset Walker, Leo DeCrenza and Donald Norris along with collaborations with French houses such as Paquin and Jacques Heim.
In 1954 Dave Bellsey brought out a line of coordinated separates. The Bellsey lines were carried across the US in stores such as Addis (Syracuse), B. Forman Co. (Rochester), Mabley and Carew (Cincinnati), J.J. Haggarty (LA) , Bergdorf Goodman, LL Berger (Buffalo), Halle Bros. (Cleveland), and Joseph Horne (Pittsburgh). In 1950s ads, Montreal and Melbourne locations are noted as well as New York. They continued to produce quality women’s clothing into the 1960s. David Bellsey died in 1968, Robert in 1970. 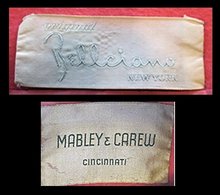