Arthur Weiss (1875-1942) was born in Hungary to Simon and Rosa Weiss. Simon Weiss was a shirt manufacturer in New York in 1900 and Arthur was working for him at this time as a shirt salesman. Records from the 1910 census show that Arthur Weiss continued to work as a salesman – his occupation was given as “Commercial traveller – shirts”, so he was possibly selling his father’s shirts in the Midwest.

By the mid teens, Arthur was running his own business from headquarters in Chicago, IL. The first advertisements found are for Arthur Weiss & Co dating from 1914, at which time the business address was 327 West Adams Street, Chicago, IL. Arthur Weiss’ WWI draft registration confirms that he owned his own business with his occupation noted as “Ladies Garment Manufacturer” at 317(?) West Adams Street, Chicago. It is also noted at this time that Arthur had married Ethel. They had three sons, Sidney, Jerome and Robert.

Arthur continues after WWI as a dress maker in his own factory. Later advertisements note that Arthur Weiss & Co. was situated at 315-27 West Adams, and one reference noted that they were in New York and Chicago. 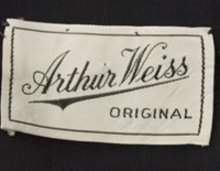 courtesy of dorotheascloset.com
← previous next →