Aristos Constantinou opened his Aristos boutique on Carnaby Street in 1966. In 1971, he was joined by his brother Achilleas and together they formed Ariella Fashions Limited. Hence the label being ‘designed by Aristos’. They expanded from these premises into Duke Street, Oxford Street, Newburgh Street and more on Carnaby Street. In the 1970s, Punch Magazine described them as ‘the power of Carnaby Street’.

They were so successful that they began to supply their clothes, wholesale, to large retailers. By 1974 their headquarters were in Marylebone, a showroom in Great Portland Street and nine retail shops including branches in Chicago and Lausanne, Switzerland. They eventually moved to larger headquarters in Wood Green, but the retail side of the business was being overtaken in importance by the wholesale operations.

They have worked with such designers as Anthony Price and Christina Stambolian. They now specialise in evening, cocktail and occasionwear and casino uniforms. 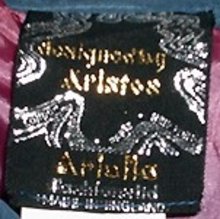 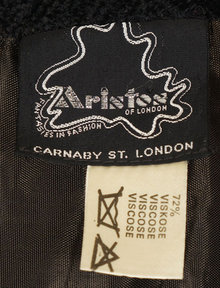 Courtesy of poppysvintageclothiung
← previous next →