Aquascutum is one of the classic British ready-to-wear houses. Aquascutum opened in the UK in 1851 as a tailor’s making men’s clothing from a special waterproof woolen fabric. They received a royal warrant from the future King Edward VII in 1897.

The Aquascutum coats were put to the test in the Crimean War. A General Goodlake was actually saved from capture when his Aquascutum cloak disguised him against the ground – one can view this coat today at Newstead Abbey! And it was Aquascutum that developed the raglan sleeve for Lord Raglan, who presumably wore his namesake coat during the Charge of the Light Brigade.

In 1909 Aquascutum began making women’s wear, including clothing especially for sports such as golf. The company prophesied, ‘Coats for women will lead to votes for women.’

They produced trench coats during WWI, and after the war, this style became popular with the general public. In 1953 Edmund Hillary and Tensing Norkey climbed Everest in Aquascutum hooded jackets and trousers made out of wind resistant cotton nylon blend.

During the 1950s, Aquascutum began making a more fashionable line, which continues today.

Thanks to ‘The Aquascutum Story’ by Patrick Campbell (1976)
for some of the information in this history. 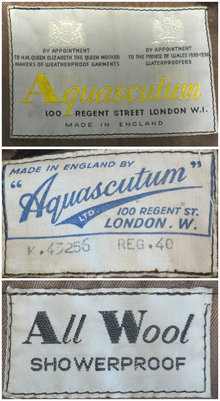 from a 1980s classic blazer

from a woman's 1980s trenchcoat 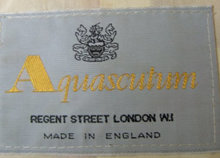 Courtesy of LeonardoDaVintage
← previous next →