Apple was a short-lived clothing boutique owned by the Beatles’ Apple Corporation.

In September 1967 while filming Magical Mystery Tour, The Beatles decided to open a fashion boutique as the first venture in their newly founded Apple Corps empire. Their accountants had already acquired 94 Baker Street in London as a long-term investment and so they decided to give the “Fool” £100,000 to design and stock the new Apple Boutique in the premises.

The Fool began by engaging a group of art students to help them paint a huge psychedelic mural that they had designed across the while exterior of the store, and were instantly met with complaints from other merchants in the area. The interior of the store itself was being organised by The Beatles so every morning Paul McCartney would turn up to ask the workmen to literally move the walls around, and John Lennon would turn up every afternoon and demand they be put back.

John Lennon’s childhood friend Pete Shotton had been managing a supermarket that John had purchased and was brought in to manage the store, helped by George Harrison’s sister-in-law and sometime model Jennie Boyd whose presence seemed to attract more stares than purchases. When additional staff were aquired they fitted the shop’s strange atmosphere perfectly. One was a self-styled mystic named Caleb who slept underneath a showcase during his breaks, and the other was a larger than life lady who floated around the store in authentic gypsy costume.

The first business problem Pete Shotton came across occured before the stock had even been created. Cutting rooms had been established above the shop where tailors could begin turning thousands of pounds worth of fabric into Fool creations. Amongst the orders for vast bolts of raw silk and lush velvets The Fool had ordered multi coloured silk labels for all their designs which resulted in the label often costing more to produce than the clothes could eventually be sold for. Pete tried to bring this problem to his friend Lennon’s attention and was told “Oh, let them do what they want. We’re not business freaks, we’re artists… if we don’t make any money, what does it matter?”

The opening night party was held in the first week of December 1967, attended by John Lennon and George Harrison. Celebrity friends such as Cilla Black were handed apple juice as they walked in and entertained with a fashion show and a variety of circus acts.

The Apple Boutique was a financial disaster and closed after eight months. The trinkets stocked in the shop were of the sort people could already buy in various shops throughout London, much of the fashion seemed to be in the style that everyone had worn last Summer and the huge changing rooms were perfect for shoplifters. The shop hadn’t even been open two months before its manager Pete Shotton quit.

The boutique had managed to lose The Beatles nearly £200,000 in only seven months, and was still loosing money after the new manager John Lyndon took over and threatened to ban The Fool from the premises if they removed any more stock or charged any more debts to Apple. The bold psychedelic mural proclaiming the Beatles’ presence on the street had disappeared in May after the Civic Association had begun proceedings to have it removed. The shop was now a stark white with tiny writing above the windows nonchalantly declaring you were at Apple, and the flat atmosphere inside the shop seemed to match it perfectly.

On the morning of 30th July 1968 the staff were told to open the doors the following day and give the stock and fabrics away. The giveaway had been publicised via the newspapers and the television and when the doors opened there was a queue of scavengers three blocks long. It was decided to open the basement doors to allow the crowds to walk through the store and right out the other side. The Beatles had ordered that no limit be put on the amount of stock people could take, and after armfulls of clothing and uncut fabrics disappeared out of the doors, coat hangers and shop fittings began to disappear. 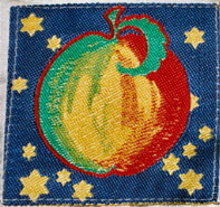 Courtesy of an anonymous donor
← previous next →