Annacat was the Biba of The Brompton Road, being formed in 1965 by friends Janet Lyle and Maggie Keswick. Although little is known about the origins of the boutique, it is easy to show the sense of fun and youthful enthusiasm which encapsulates the Boutique Movement through the designs of Annacat. They were highly favoured by British Vogue (something which Biba and Mary Quant struggled with throughout the 1960s, despite their fame and obvious charms), and the two female designers would appear to have been very ‘in’ with the London scene at the time – which might explain their favoured status. There is a real sense of fun and decadence about their pieces, regularly trimmed in ostrich feathers, printed in feminine, swirling psychedelics and with historically influenced, sexy shapes.

The shop also stocked concessions by other designers (such as Patrick Lichfield), amongst the Lyle and Keswick pieces. Apparently, the boutique was the first London outlet for Laura Ashley in the late 1960s – before her own shop opened on the Fulham Road. In 1968, a New York Annacat was opened on Madison Avenue.

Annacat was sold wholesale in 1970, as presumably there weren’t enough customers clamouring for sequin trimmed dungarees(!), and failed to continue with the critical success of the early years with a different designer at the helm. From being a seemingly permanent fixture in Vogue throughout the late 1960s, I haven’t seen anything of them in my 1970s editions. Perhaps proving that the main reason they were so successful in the first place had been the personality of the two young party girls who started it! 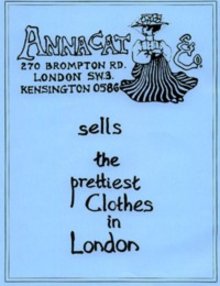