Alfred Angelo was established in the early 1930s by founders Alfred Angelo Piccione and his wife Edythe Vincent Piccione. They were a maker of mainly bridal dresses, but they also produced other evening wear and prom dresses. Into the 2010s they were one of the largest producers of bride’s dresses in the world. In 2017 the company abruptly filed for bankruptcy and closed their sixty stores. 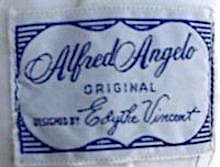 Courtesy of caseyd
← previous next →