Mary Adrienne Steckling-Coen (1934-2006), known to the fashion world as “Adri,” was born in St. Joseph, Missouri, where she attended the School of Fine Arts in St. Louis. After winning a guest editor spot on Mademoiselle magazine’s College Issue in 1955, she decided to stay in New York and transferred to the Parsons School of Design. While at Parsons, Adri met designer Claire McCardell, who was volunteering as a critic in the fashion design department. McCardell became Adri’s mentor and was highly influential in helping her define her design aesthetic, as the two shared a passion for creating clothes for the modern woman with an active lifestyle.

After graduating from Parsons in 1958, Adri apprenticed a number of designers including Oleg Cassini and Anne Fogarty. She launched her first solo collection for Adri Designs Inc. in 1966. A long list of sportswear lines followed under several different labels. She opened Adri Studio Limited on Seventh Avenue in 1976, featuring designer sportswear with her trademark style; mix & match pieces with clean, elegant lines.

Among her many accolades, The Smithsonian Institution honored both her and McCardell with a 1971 exhibition titled “Innovative Contemporary Fashion: Adri and McCardell.” She received a Coty American Fashion Critics “Winnie” award in 1982.

In the 1980s-1990s Adri created a series of Vogue designer patterns and continued to design several sportswear collections a year, selling to boutiques and private customers until her death of Parkinson’s disease in 2006. 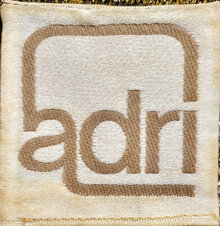