Abercrombie & Fitch was started in 1892 in New York City by David Abercrombie as Abercrombie & Co. His products consisted of outdoor gear, such as camping and hunting equipment, which he sold to professional explorers and avid outdoorsmen. In 1900 he was joined in the business by Ezra Fitch, who had the money for expansion. In 1904 the store moved to Broadway, and the company incorporated as Abercrombie & Fitch Company.

The partners disagreed as to the direction the company should take, and so Abercrombie sold his part of it to Fitch in 1907. Fitch greatly expanded the scope of the store, adding a large mail order catalog, and giving the store itself an outdoorsy feel, with even a campfire blazing. In 1913, Fitch moved again, this time near the fashion center of Fifth Avenue, and he began to carry a line of women’s sports clothing.

Fitch retired in 1928, but the company continued to thrive, buying the Von Lengerke & Antoine sporting goods store in Chicago and other sporting goods stores. They were probably the largest sporting goods store in the world. In the 1950s, new stores were opened in San Francisco and several seasonal stores were opened in resort areas, and the Von Lengerke & Antoine property in Chicago was changed to Abercrombie & Fitch. But by the late 60s the business was in financial trouble, and bankruptcy was declared in 1977. It was acquired by Oshman’s, another sports store.

The big change came in 1988, when Abercrombie and Fitch was bought by The Limited. They set out to change the company to a mall chain, with a target market of teenagers and college students. The concept was successful, and stores were opened all over the country. The Limited sold off their interest in the late 90s. Since then, the company has been known for their sexy catalogs and store environments.

from a late 1940s chamois underdrawers

from a 1950s Nordic sweater

from a 1950s cashmere cardigan

from a 1950s hunting jacket

from a 1950s cashmere sweater set

from a 1950s cashmere cardigan

from a 1960s Nordic sweater 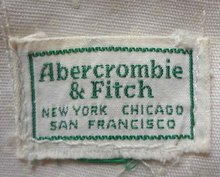