Modern bathing (or swimming) caps have been around since rubber was invented in 1883. The invention of latex in the 1920s helped make the caps more pliable, and as swimming became popular as a sport, caps were worn by more and more people. Plain caps were worn for swimming and fancy caps became a fashion accessory. A 1919 Kleinert Rubber Co. ad shows fanciful styles in caps, turbans, and bonnets, called “Millinery for Mermaids.”

Production of the caps dropped off during WWII as the materials were needed for the war effort. During the 1950s, their production and popularity increased. The caps became fashion statements, made in all colors and textures (including caps made to look like hair). Iconic flower-covered caps were all the rage.

In the 1960s, many public pools still required the use of caps, but the elaborate styles were mainly worn by older women and were no longer part of mainstream fashion. Plain caps were still worn for competitive swimming. By the 1980s, competition caps were being made of lycra, latex, silicone, and neoprene, and the wearing of the caps as fashion accessories was over. 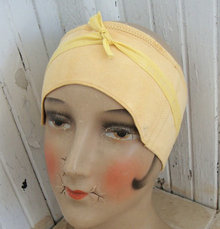 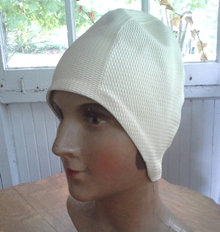