Sweatband, also referred to as a sweat leather or hat leather, is the band of leather, fabric, or other material sewn inside the base of a hat crown, primarily to guard against perspiration damage but also to improve fit. They were first used in men’s hats.

Sweatbands emerged in the early 19th century, with hundreds of patents issued over the following decades addressing design and manufacture — including ventilation and reeding, and various machinery for attaching the sweatbands or stamping them with maker and retailer logos.

A sweatband may be reeded or unreeded. Reeds (of natural bamboo or rattan at first, synthetic later on) were inserted where the sweatband was joined to the hat to seal the stitches there and prevent perspiration from seeping through them and staining the felt or straw exterior. Though reeding was used occasionally in the mid-19th century, it didn’t become a standard part of hat construction until well into the 20th century.

Nineteenth century sweatbands were typically of leather, though some were oiled silk and some were made of a paper-based leatherette. Plastic-based imitation leather sweatbands first appeared in the late 1930s but weren’t widely used for another two decades. The foam sweatbands of the 1960s were designed to be more comfortable and absorbent than leather and, at first, were more expensive.

Many sweatbands were made adjustable, into the early 20th century, via a string threaded through a series of perforations or slots. The threaded cotton tape and bow seen in the back of hats to this day is a vestige of this feature.

In addition to protecting the appearance and enhancing the fit of a hat, sweatbands served another practical purpose, as a kind of secret pocket where men stashed everything from train and lottery tickets to cash. Abraham Lincoln, to the distress of his secretary, often carried important papers tucked into the sweatband of his stovepipe hat. 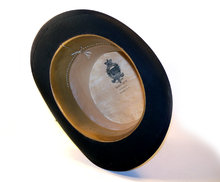 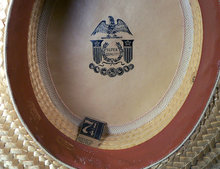 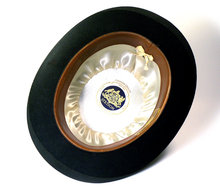 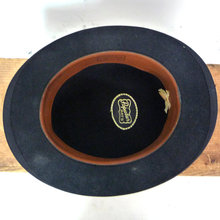 Courtesy of nvcmens
← previous next →