The Homburg is a fairly formal-looking hat, often made of felt, that has a creased, tapered crown and a rolled brim. It is generally associated with day or business wear when sported in cream, beige, tan, brown, gray, light green, dark green, midnight blue, or black. When worn in midnight blue or black, it is also correct as formal fashion with evening attire, such as a dinner jacket/tuxedo (but never with white tie).

The Homburg is named after the town of Bad Homburg, Germany, where residents had long worn similar hats of Tyrolean origin, dating as far back as the 1880s. Popular lore has it that King Edward VII visited the area’s spas, and during one of his visits ordered a hat – which allowed the style to gain visibility and popularity.

The Homburg hit its fashion stride in the ‘teens, and remained in fashion through the 1950s. The Homburg even had the distinction of being chosen by Dwight D. Eisenhower for his inauguration as U.S. President in 1953, which caused it to surpass the top hat in popularity for formal daywear. Other famous wearers of the Homburg include British Prime Ministers Anthony Eden and Winston Churchill – and, of course, famed fictional detective Hercule Poirot, who never left home without his Homburg. 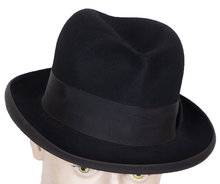 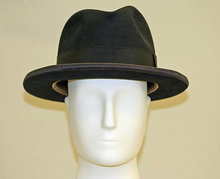 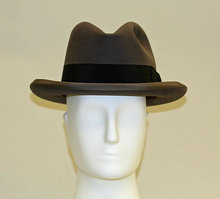 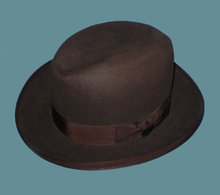 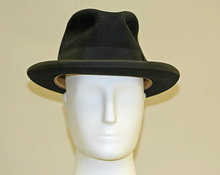 Courtesy of the Metropolitan Museum of Art
← previous next →