Although the resemblance to the Raccoon is startling, the Raccoon Dog (or Tanuki, in Japanese) is not closely related to a Raccoon, but rather is a member of the dog family.

The legs are short and covered with a coat, which is almost black. The tail is short and bushy. The body is dark brown and yellowish because of the yellow tips of the hairs. Among the dog family this species has the least blade-like teeth and there is often an extra upper molar, bringing the total number of teeth to 44. The length of the head and body is about 24 inches with a tail of about 7 inches. It weighs about 16 pounds.

Native to southeastern Siberia, Manchuria, northern Indo-China, China and Japan, Tanuki were introduced to the western parts of the former U.S.S.R. for fur farming. Some escaped (or were released) and since the 1950’s have spread westward into Scandinavia and south even as far as France.

The Tanuki is the subject of innumerable amusing and intriguing myths and folk tales. Often linked with the teakettle because of its pot-bellied appearance, its image is that of a jolly, carousing and womanizing character. Like the Kitsune (red fox) it is a master of shape changing and disguise. The term Tanuki-gao is often used to describe women with rounded facial features. This is in comparison with the more tapering Kitsune-gao or ‘fox-face’. In the past it was hunted in Japan for its meat, its black-brown fur (used for making brushes) and its bones, which were reputed to have medicinal qualities.

In Kabuki Theater, the Tanuki often changes himself into a handsome young man in an effort to seduce a young lady. However, his efforts never quite succeed because she usually has the good sense to put him to a test. The Tanuki is so fond of sake that the mere scent of it causes his tail to rise. When the young lady offers him a drink, he is immediately and unceremoniously exposed as a fraud.

According to popular legend, on bright, moonlit nights, Tanuki gather in secluded forest clearings and party down, beating strange rhythms (ponpoko, ponpoko) on their bellies. The Tanuki’s most notable physical feature is his huge scrotum; based on a popular song, it makes an awesome sound (bura bura) as it sways in the wind. The Tanuki is a mysterious creature with mystical powers but his character defects deprive him of their full benefit. With the smirk on his face, protruding belly, huge scrotum, and a jug of sake carried in full view, he is indeed a very strange and unusual creature. (Dobu Nombe) 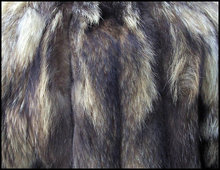