The opossum is from North America and Central America, and is is often confused with it’s cousin the possum which is from Australia and also now inhabits New Zealand. American opossum is considered a pest by many as it lives in grassy lands, is often found hunting in urban waste bins, commonly crosses the road at the wrong time, and winds up being roadkill after being hit by vehicles. The fur is of two layers, a longer layer of silver gray guardhair and a shorter layer of underfur that is thick and white with black tips. The fur is sometimes tinted, dyed, sheared, or plucked, and it feels soft and thick. The fur can last many years if properly taken care of. Commercial use of opossum helps prevent habitat loss.

Water Opossum: Found from southern Mexico and Belize to northeastern Argentina. The fur is relatively short, fine, and dense. The back is marbled gray and black, the rounded black areas coming together along the midline. The muzzle, a band through the eye to below the ear and the crown are blackish; a prominent grayish white, crescent-like band passes from the front of one ear to the other, just above the eyes. The chin, chest, and belly are white. The long, rat-like tail is well furred only at its base and is black near the body and yellowish or whitish towards the end. The facial bristles are stout, long and placed in tufts. 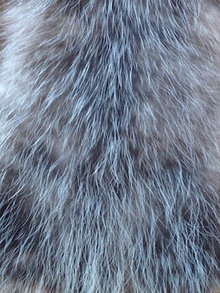 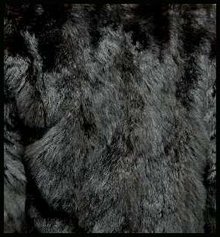 Courtesy of thefashioneye
← previous next →