The ocelot is probably the best known of the South American cats because of its pelt being the mainstay of the fur trade. The ocelot is much larger than its cousins the Margay and the Oncilla, although they bear a striking resemblance. Its coat tends to be more blotched than spotted. Its chain-like blotches and spots are bordered with black but have a lighter colored center. These markings run the entire length of the cat. The ground color varies from whitish or tawny yellow through reddish gray to gray.

The ocelot was frequently kept as a pet. However, ocelots are high strung and unpredictable, so humans have de-fanged, de-clawed, de-scented and altered these cats in order to make them conform to the ‘pet’ industry. Like all exotic cats, these creatures, male or female, altered or not, spray a foul smelling urine on everything they wish to mark as theirs. 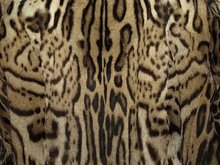