Made from the pelt of the Abyssinian, or Central African Colobus Monkey, the fur is very long (reaching lengths of 5 inches or so), sleek, shiny. It looks and feels eerily like human hair. Monkey fur was very popular from the mid nineteenth century through the 1940’s during which time the Colobus Monkey population dropped to alarmingly low numbers.

Commonly you will see Colobus Monkey fur used in various trimmings on late 1920’s capes and coats and later, in full and short monkey coats and short capes from the 1930’s to the 1940’s.

This little depression era fashion quote marks the climate of the times for this fur:

“When the big 1927 fad for monkey fur died down, the furriers put all their monkey surplus in warehouses, a dead loss. Now it is all out again. Cables have been rushed to Africa for more of the long, silky sophisticated hairs, and the depression times are boom times on the Gold Coast’. ‘Little Acorns.” Harpers Bazaar, April 1933.

There are five species of black and white Colobus monkey, ranging from all black (the most common fur you will find) to a skunk-like black and white pattern. Red Colobus monkeys are found across Africa from Zanzibar to Senegal. Their color is highly variable, ranging from brilliant white and red in East African to slate gray and orange in Western African monkeys. The little-known Olive Colobus is found only in the forests of coastal West Africa. It is the most drably colored of the African Colobus monkeys being a fairly uniform gray-brown.

The frenzy for these unusual furs can be evidenced in a letter from the young budding actress Norma Jean (Marilyn Monroe) as written to Grace Goddard in 1944. She mentions the possibility of buying a Monkey Coat and promises to write about it later. 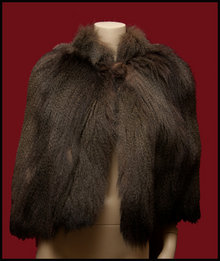 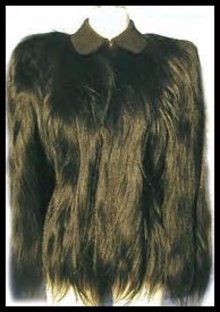 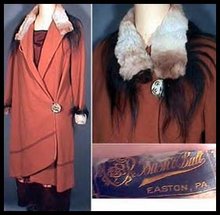 Courtesy of pastperfectvintage
← previous next →