Found primarily in the Northwest Territories of Canada, the marten includes 5 subspecies including the marten, Newfoundland pine marten, eastern marten, western marten, and the Rocky Mountain marten. The Northwest Territories, the winter coat starts growing in mid-October. The fur is basically brown but varies from almost black to a yellowish-brown color that is darker on the legs and tail and lighter on the head and under parts. The throat has an orange or yellow patch. The winter fur is warm because of the combination of stiff glossy guard hairs that trap pockets of insulating air and fine dense under fur. The fur thins by March and by mid-June the animals have their summer coloring comprising gray-brown with a reddish-yellow throat patch.

The female marten, which measures about 20 inches long and stands 6 inches tall, is about three-fourths the size of the male. Their fur is soft and thick, varying in color from pale buff or yellow to reddish or dark brown. Their throats are pale buff with black tails and legs. Two vertical black lines run above the inner corners of their eyes.

The furriers’ name for pine marten is Baum marten. Pine martens are small, soft gold in color and look somewhere between golden sable and gold-dyed mink. They are often confused with fishers and stone martens. Fishers live in similar habitat, have similar tracks but are darker in color than pine martens. Stone martens are not native to the same area, but are about the size of the male pine marten and are creamy beige in color, boasting a dark brown stripe.

In the fur industry marten have been called Canadian or American sable in an effort to link them to the valuable Russian Sable. The species was endangered due to over trapping at the turn of the 20th century. 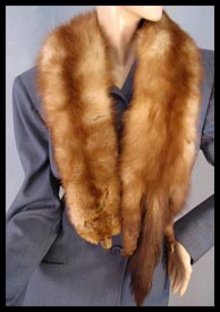 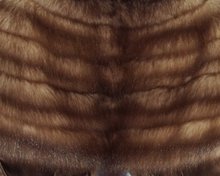