In the 1830s, the first cross cut Gigot or Leg O’ mMtton sleeves appeared. The previous shoulder fullness dropped toward the elbow and sleeves became enormous. The waist resumed its natural position while necklines became very wide and bodice lines took on a highly distinctive V-shape. Ankle length skirts became quite full and needed several petticoats beneath for support. This produced the 19th century’s first version of an hourglass silhouette.

As so often happens, when one fashion change occurs, the rationale for another is created. The very full sleeves that were the rage created the need for alternative outerwear. It was difficult to force these large sleeves into coats and so cloaks were worn. Short capes with longer front ends called pelerines become quite popular as did chemisettes (under-bodices of net or lace) for low-necked gowns. The focus was clearly on femininity. Aprons were popular accessories. 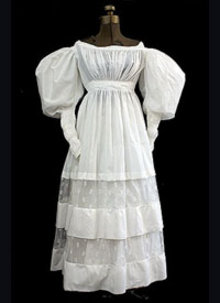 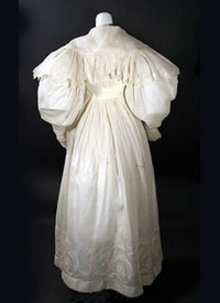 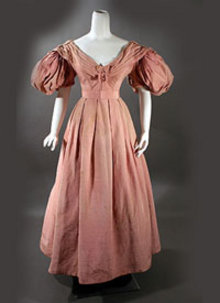 Courtesy of antiquedress.com
← previous next →