The fashion canvas of the 18th century changed radically as the 19th century began and simpler, lighter brushstrokes were applied. Fashion in the first two decades mimicked classical Grecian drapery with its fluid lines. Bodices were minimal, cut to end under the bust thereby achieving a high waist that defined the silhouette. Necklines were predominantly low. Sleeves could be long or short.

The fiddle-back bodice, with side, back and shoulder seams that were placed to form a diamond shape, was typical of this period.

The use of tiny piping to finish seams began in this decade.

Dresses generally opened in the front, with pins or drawstrings as the closures, while the skirts of the dresses had side openings, if any at all. The desired effect was one of simplicity. White was the most popular color and any applied trimming was used sparingly.

Fabrics were lightweight, soft drapery, with embroidery and details that did not interrupt the aesthetic flow. Outerwear consisted of Spencer jackets (waist-length jackets named after Lord Spencer), pelisses (a type of sleeved cloak) and the ubiquitous long shawl. 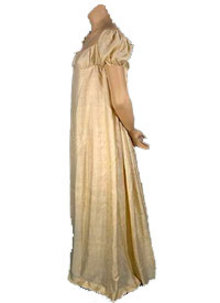 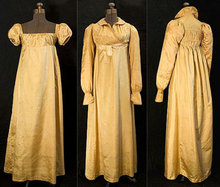 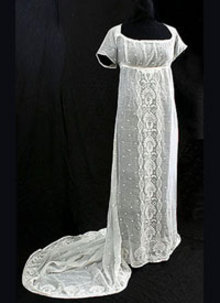 Courtesy of vintagetextile.com
← previous next →