Tina Leser (1910 – 1986) was born Christina Wetherill Shillard-Smith. She was the daughter of an affluent Philadelphia stockbroker and his artist wife. The family traveled widely and, as a young child, Tina visited Asia, Europe and Africa and, for a time, actually lived in India. When it came time to choose a career, she settled on art school, and first attended the Pennsylvania Academy of Fine Arts, and then the Sorbonne, in Paris. 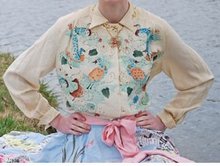 In 1931, at the age of 21, Tina married Curtin Leser, and the two of them moved to Honolulu, Hawaii. It was here that Tina Leser began her career in fashion. She opened a shop in 1935, in which she sold clothing that she designed. Leser used native Hawaiian and imported Filipino fabrics to construct sportswear, day wear and gowns. She then worked with a process to hand-block designs onto sailcloth. As an artist, she often hand-painted a fabric to order. A customer might order a special skirt with the family pet hand-painted on it.

In 1940, Tina Leser went to New York on a buying trip and to try and sell her designs. Partly through the influence of Harper’s Bazaar editor, Carmel Snow, she placed an order with Saks for 500 garments. She continued to live and work in Honolulu, but in 1941 she decided to open a business in New York. She closed her Honolulu store in 1942 after the bombing of Pearl Harbor, and moved to New York. There she ran her company until the next year, when she became the designer at Edwin H. Foreman. It was at Foreman that Tina Leser developed the international style for which she became famous.

It was wartime, and travel around the world was quite limited for the private citizen. But Leser looked for, and found, interesting cultural influences close to home – Mexico, Guatemala, Hawaii, and the USA countryside. From Mexico she took the traditional appliqued flannel jackets and added sequins. From Guatemala she took their handwoven cloth and made skirts and playsuits. Their blanket fabric was turned into strapless dresses.

She utilized Hawaiian shapes – the sarong and the wrap skirt – and also used Hawaiian fabrics to make an innovative bathing suit that had just one strap. And she referenced the United States by taking the coveralls adopted by so many American women factory workers, and making attractive versions in flannel and plaid. 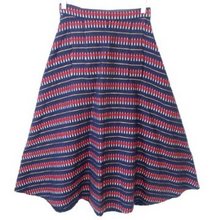 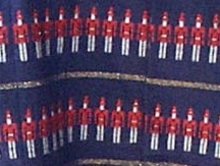 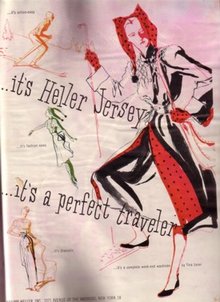 Above is a great example of a 1940s Leser skirt. The fabric is a Guatemalan woven design.

After the war, Tina continued to design clothing for the active woman. The ad above from the November 1, 1946 Vogue, shows a complete travel wardrobe made from jersey, including an evening gown. The caption reads: “…it’s action easy…it’s Heller Jersey…it’s fashion news…it’s a perfect traveler…it’s dramatic…it’s a complete week-end wardrobe by Tina Leser”

During the Foreman years, Leser began designing the garment she perhaps she is most associated with – the bathing suit. The suit below dates from 1949, and was featured in a Holiday magazine article on the history of the swimsuit. 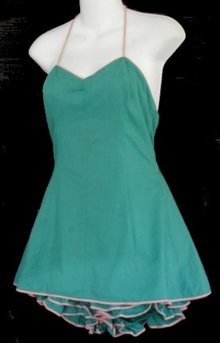 In the postwar era India was very much in the news, and in Tina Leser’s mind. Having spent part of her childhood in the country, it was natural that India’s move toward independence would inspire her to base many of her designs on the country’s ethnic clothing. She began the first of many designs based on the fabrics, colors and shapes of Indian traditional clothing. In 1947 she did a line of beachwear and sundresses made of traditional Indian madras plaid, a theme she continued to reinterpret through the years.

A Honeymoon to Remember

One of the most remarkable events in Tina Leser’s career was her honeymoon! She was remarried in 1948 to James Howley (she and Leser had divorced in 1935), and for their honeymoon the pair took a trip around the world. Actually, it was an inspiration-finding expedition, and it led to her Fall 1949 multi-cultural collection.

The influences were gathered from what she would see on every step of her journey – kimonos from Japan, silk pajamas from China, a priest’s coat from Thailand, the colors and embroideries of Indian fabrics, peasant clothing from Italy, antique fashion plates from France and porcelains from England – all influenced her fall line. 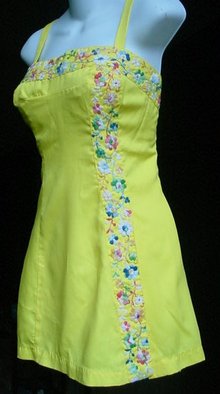 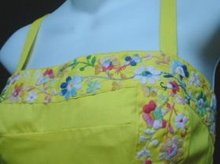 After 1949, Leser continued to reference a variety of ethnic influences, often mixing them in a single garment or collection. For example, she might take a purely American fabric such as the red and white check commonly used in picnic tablecloths, and sew it into an item with an Asian-influenced shape such as a sarong or kimono.

She also liked to take a favorite fabric or trim and use it across her collection. I’ve seen embroidery very similar to what is on the yellow bathing suit above made into a hostess gown, trimming the edges of a cashmere sweater, and made into a pair of slacks. 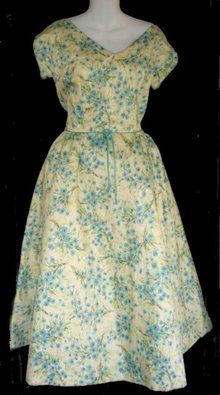 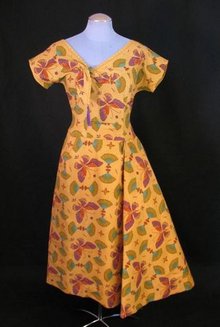 But so that you don’t start thinking that ALL Tina Leser could design was exotic and foreign-inspired, she also used fabrics from some of the very best fabric design firms. Most notably, she had designs using the “Modern Master” series of fabric from Fuller. This was a series of fabrics commissioned by Fuller Fabrics by some of the world’s most prominent artists, such as Picasso and Miro. She also used Wesley Simpson prints, Hope Skillman fabrics and Boussac florals. And she loved and used cashmere, both from the American firm Dalton and the Scottish firm Pringle.

She designed lots of pretty dresses that today would be considered to be quite dressy, but in the late 1940s and into the 1950s, were much more casual than what most people were accustomed to wearing. A great example is the dress (above left), which was featured in a 1956 Good Housekeeping article.

Tina Leser left Foreman in 1953 to form her own company, Tina Leser Originals. In the 1950s, women needed clothes for an increasingly casual lifestyle, and Leser’s pieces were casual but sophisticated. People were entertaining at home, and many of Leser’s ads during the 1950s show a relaxed hostess curled up in a pair of her slacks and a comfortable tunic.

She perfected (some references say “invented”) the slim toreador pants of the 1950s, which were often paired with exotic tunics or cashmere sweaters trimmed with embroidered edgings. And in 1957 she showed a cashmere sweater that was dress length, bringing about the inception of the “sweater dress.” 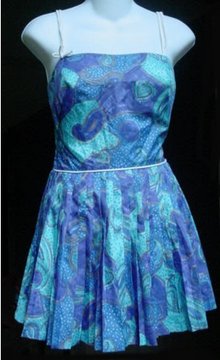 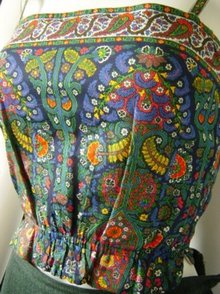 She entered into a design arrangement with Gabar Swimsuits, and she designed for them for many years. She’s often thought of as a swimsuit designer, mainly because her work for Gabar was so wide-reaching. But it was not just swimsuits she was designing – it was a whole new way of wearing them. The cover-ups and skirts and matching shorts and wraps incorporated the design of the swimsuit beneath into a complete ensemble. The bathing suit became the foundation for streetwear. 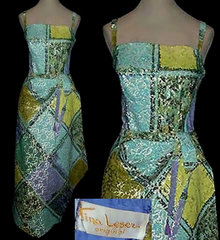 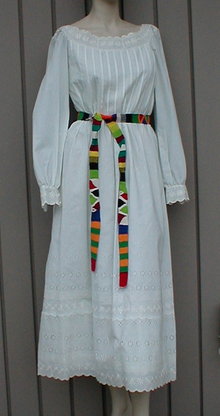 In 1964, Leser closed her business, only to open it again in 1966. Her first collection after her re-opening was a tribute to India, with the fabrics being made on traditional Indian looms. She continued to make clothing that was Asian in feel, but she concentrated less on sportswear and more on clothing that was adaptable to many situations, be it evening, day or at home. Her fabrics were still very much inspired by her travels.

Tina Leser Originals remained open until 1982. Leser died four years later in 1986. Hers was a life of fashion and travel, and our fashion history is rich with the legacy of exotic places which she brought to us.