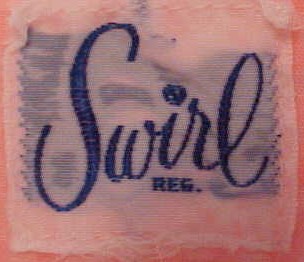 Swirl was not so much a company as it was a product, especially in the early days of production. But in order to understand the product, we need to know a little about the company that produced it.

The story starts in Philadelphia with the L. Nachman and Son Company, which was located at 10th and Berks Streets. This company had produced clothing since the early days of the 20th century. In 1944 the Swirl dress and label were born. Actually, the Swirl was originally conceived as an apron. When Lawrence Nachman registered the Swirl name with the US Patent and Trade mark office, the product was listed as “WOMEN’S AND GIRLS’ WRAP-AROUND APRONS”. The wrap around apron was a common garment of the day. 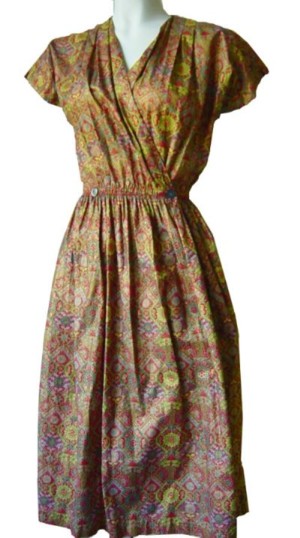 By 1953, Jack Nachman, president of the company, was looking to relocate the Swirl operation. I couldn’t find a definite reason for this move, but two theories are proposed. First, they needed to be closer to where the cotton fabrics they were using were being produced. This would save transportation costs. Secondly, it’s very likely that they wanted a cheaper source of labor, which was easily found in the non-unionized South. 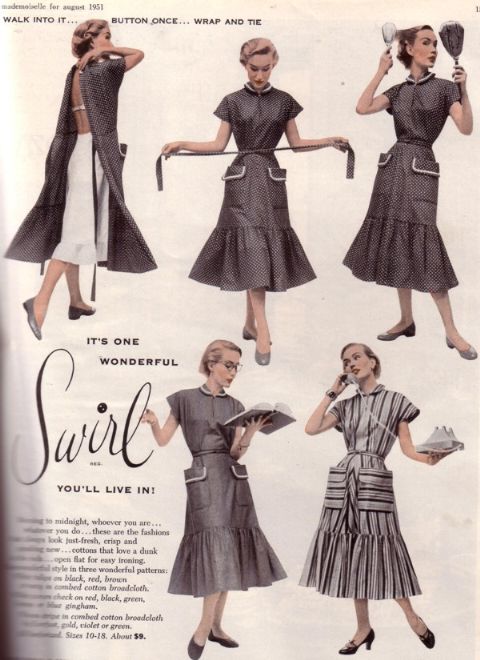 So Mr. Nachman went south, to Greenville, South Carolina. Through business contacts there he settled on the little town of Easley, about 15 miles from Greenville. The location was ideal. The town was in the middle of the cotton belt – the area where cotton was grown and then made into cloth. The textile industry was booming. In fact, there were 67 factories producing cotton fabric in the Easley-Greenville area – factories eager to supply their product to a new clothing production plant. 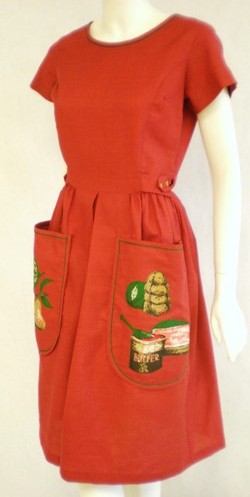 And labor costs were very cheap. Most of the people eventually employed at Swirl were women, and that combined with the absence of unions worked to keep wages low.

The Nachman Company started construction on the Easley Textile Company (as the new subsidiary was known) in October, 1953, and in January 1954 the new plant opened. The plant was state of the art, with all new machines from Singer. This is interesting, because when a plant relocated in this fashion, it was usual for all the old machinery and equipment to be moved to the new location. 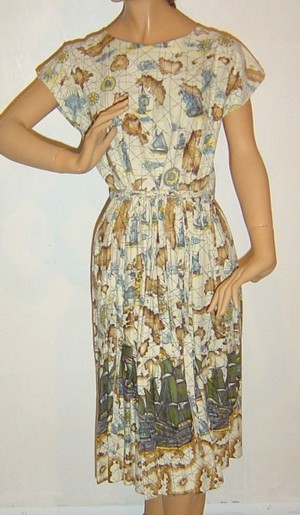 By 1955, the company was known as Swirl, Inc., with the corporate headquarters in Easley. According to the local Chamber of Commerce, the money generated by the plant (along with that from another new factory in town) enriched the town coffers to the point where a long-delayed hospital project was finally finished. Soon, a second Swirl factory was built in nearby Ware Place, South Carolina. 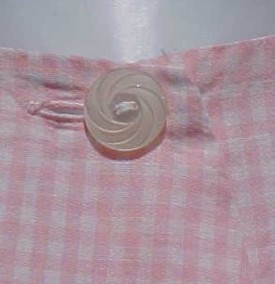 At the same time, the product line was expanded widely. A wide variety of cotton print fabrics were readily available, and Swirl took full advantage of this. Swirls were made in hundreds of different fabrics, and were decorated with embroidery, applique, lace, piping, rick-rack, and a wide variety of trims. The basic shape of the dress was always the same, with a bodice and sleeves cut in one piece and a full, usually gathered, skirt. They used a signature “Swirl” button at the back of the neck.

This one dress, the wrap model, was the sole product of the plant until 1962. At that time a second product, the Models Coat, was trademarked and produced by Swirl. The Models Coat, which sounds glamorous, was just a straight cotton robe that snapped up the front.

The Swirl wrap dresses were also made, but they were getting shorter, as the age of the miniskirt was looming. By 1964, the company could see that fashions were changing radically, and their product was quickly becoming out-moded. Plans were made to update the image of the company.

As lifestyles changed, so did Swirl. In the 1960s Swirl began making women’s loungewear and developed different lines for a more diverse consumer base. The first addition was the Park East label in 1964. Park East was used mainly on shift dresses, sort of in the Lilly Pulitzer mode. In 1965 came Swirl Girl, a younger, trendier line of casual dresses and loungewear.

I’m not really sure when the last Swirl wrap dress was made, but I’ve seen them that were knee length and had care labels, so it is my guess that the wrap Swirl was still being made in the early 1970s. They also started making them floor length, as the fashion for floor length dresses re-emerged in the 1960s. 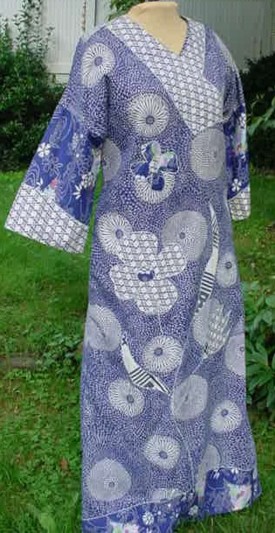 In 1971, the Concept 1970s label was born, and along with it plans were made for Concept 80s. Concept 70s garments were often long and flowey, rather caftn-like, and they also made long, flowy jumpsuits. Also, starting in 1975 was Swirl with Maxime. Many of these 1970s loungers were decorated in traditional Swirl style, with applique and trim, and usually cotton fabrics were used. But as the decade progressed, Swirl started using polyester and synthetic blends.

In 1975 lingerie designer Bill Tice was hired as the designer at Swirl, where he had his own label. He remained with the company until 1984. During the last part of the 1970s, the fashion world was gripped by a surge of logo-mania. Designer jeans and logoed polo shirts and designers doing lingerie led Swirl to contract with Geoffrey Beene in 1977 to do a line for them. Soon, Oscar de la Renta was signed to do robes and nightgowns. The signing of de la Renta, led to a law suit by Tice, who claimed that the company was favoring de la Renta’s loungewear over his, and that was a violation of his contract. He eventually left the company over the dispute.

By the end of the 1980s, the main product at Swirl was the Models Coat. In 1990, the first real signs of trouble for the company came when sewers were laid off and production curtailed. The decline of the company occured slowly through the 1990s, and in 1998, Swirl announced that it would be closing its main facility. The remaining jobs were phased out, and the company closed the Easley factory for good in 1999.

They did continue operations in Ware Place, South Carolina, making the Models Coat. Today, that house coat, or duster, as my grandmother called it, is still being made in New York by Swirl II Ltd, using mainly imported fabrics. The factory is located in Brooklyn, New York. 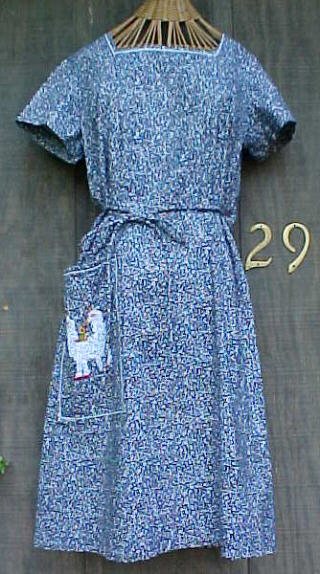 Usually when you see a Swirl dress advertised, it is described as being from the 1950s. However, the Swirl wrap dress was made starting in 1944, and it’s manufacture continued at least through the 1960s and possibly even into the 1970s. So how does one date a style that was made practically unchanged for 30 years?
First of all, look at the label. There are two labels that were used in the 1940s; “Ty-wrap by Swirl” and “Swirl by neat ‘n tidy.” But by far, most Swirl dresses are simply labels, “Swirl.” It is thought that some of the early 1950s dresses have this label, but with the addition of the word “sanforized.” 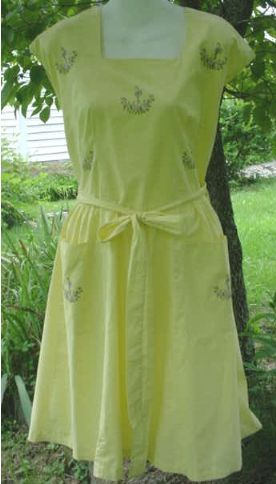 To further complicate matters, the Ty-Wrap label is sometimes found on 1960s wrap dresses. Perhaps a cache of the old labels was found and put to use at that time.

Probably one of the best ways to judge the age of a Swirl is by its length. The later Swirls are considerably shorter in keeping with the shorter dress styles of the mid 1960s. If you have a short Swirl that you think might be from the 1950s, check the hem to be sure it has not been shortened. Also, later Swirls are often not as full through the waist as those of the mid 1950s.

Another thing to consider are pockets. Vintage-voyager’s 1940s Swirl has pockets that are sewn into the side seams. The early 1950s Swirls had huge patch pockets. Later Swirls often had smaller pockets, one smaller patch pocket, or even no pockets at all.

Another clue might be the type of print and the colors used. Pink and yellow seem to be popular colors for Swirls, regardless of age, but pay attention to the details. The ultra feminine fabrics of the 1950s gave way to darker colors and more somber prints in the early 1960s.

Last of all, there are some dresses from the mid 1960s that are not wrap dresses at all. They sometimes zip up the front, and have a separate tie belt, and they do have the familiar Swirl label. The length, style and colors point toward the mid 1960s for these dresses, and it’s my guess that the Park East and Swirl Girl labels soon followed these styles.